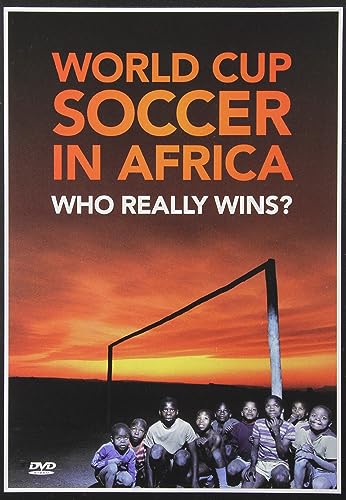 Originally called Fahrenheit 2010, this film provides reams of detail on the issues and controversy around hosting the FIFA 2010 World Cup in South Africa. First-time Director Craig Tanner interviews leaders on both sides (in South Africa in Nov-Dec 2008).

On one hand, Desmond Tutu sees the tournament as “a superb moment” for South Africa that “is going to do a world of good and be well worth the price”. On the other hand, activists challenge the hypocrisy of investing $1B in stadiums that will become unused White Elephants and are a “misappropriation of resources” that could be used for schools, hospitals, and eliminating poverty.

In accordance with his legal background, Taylor lays out a massive amount of facts and interviews. One that distressed me was the perspective of Danny Jordaan, now President of the SAFA (South African Football Association): youth lack opportunity, but watching a game in an international stadium inspires them to become professional players.

“A child in sport is a child out of court,” says Jordaan. “They don’t dream to go to hospital,”

i.e., to work in a hospital. Jordaan subsequently admitted paying Jack Warner $10M to secure votes in South Africa’s winning bid for WC 2010, but he does not admit to corruption.

The film points out that FIFA gets all the TV and sponsorship money, while the host country gets short-term jobs and tourism. In a report on the South African stadiums by the Oxford University Said Business School:

“six newly built stadiums all have annual maintenance costs which exceed their revenue, and five out of six require ongoing taxpayer support. … Failure to improve management of infrastructure around major sporting events means that the world’s sporting entertainment will be paid for by those least able to afford it.”

Subsequent to this film, FIFA steamrolled on and reapplied its stadium worshipping philosophy and process in Brazil, with similar effects. In 2015, Tanner released a follow-on documentary about Brazil’s WC stadiums: The March of the White Elephants. FIFA is now fighting corruption investigations (see the 2016 film Planet FIFA), but it is still burning its way through new stadiums in Russia and Qatar.

The last 20 minutes of this film speculate on Bafana Bafana’s chances of playing well at WC 2010 and its Witch Doctor secret weapon. Interviewees point out that the team reached its peak in 1995, and they can’t get better, partially because only about 1/3 of the SAFA budget goes to player development. The rest of the money seems to disappear, and Planet FIFA interviewees pinpoint the corruption.

Like the other documentaries I’ve watched, this one points out how economic investment in top level soccer in Africa seldom trickles down to the townships where it is needed most. (See Meanwhile in Mamelodi.) It’s too bad that not enough people are paying attention to what Craig Tanner has to say.