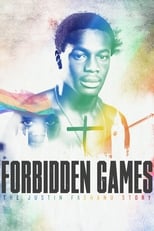 Whether you are straight or gay, Forbidden Games documents a story that is tough to watch. As his brother John has noted, if Justin Fashanu had been born 30 years later, he would have been a hero. Instead, Justin’s life story is filled with regret from almost all who knew him.

Stop right there, I’m being as misleading as the film. Justin Fashanu would have been a hero today had he simply been a proud gay man, a black man, and a good footballer.

But as I found while researching Fashanu’s background, it appears that Justin was also a rapist who surrounded himself with drugs, alcohol, teenagers, and rent boys (young male prostitutes). He also may have used date rape drugs on young heterosexual male victims who could not give consent. See the tragically lurid details from investigative reporter Brian Deer, who is interviewed in the film.

In the past year, the world of sports and celebrity have been upended by the #MeToo movement and the convictions of pedophile youth FA coach Barry Bennell and USA Gymnastics Doctor Larry Nassar.

In that light, it is impossible for me to write something positive about the story of Justin Fashanu. He had so many gifts: innate charm, good looks, a smile as bright as Whitney Houston’s, athleticism, and a body that Michaelango would have died to sculpt. His crushing burden was that he and his brother were raised by foster parents, and who knows if his pedophilia stemmed from some act perpetuated against him as a child.

The simple fact is that there is no excuse for rape or sexual assault of any kind. And I think what angers me the most about this film is that Fulwell 73 chose to spin that part out of the story. They include Brian Deer’s interview as if to say, ‘yeah that probably happened. But what a great loss for football, and all because Fashanu was openly gay.’

To be a world that doesn’t destroy itself, we need to be a diverse society supportive of all races and gender identities. The 2018 Winter Olympics demonstrated how great it is for LGBT athletes and sportscasters to be themselves. But we cannot allow ourselves to overlook criminal behavior, or we will never run out of victims.

This is the second football film of moral failure that Fulwell 73 has produced (see the Ryan Giggs movie), and I am beginning to see a pattern. While they have produced some excellent work, their documentaries need to be less misleading. If I can google this kind of information in just 1-2 hours, there is no excuse for a film company to perform less due diligence.