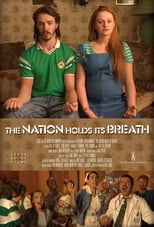 It’s hard to fathom why automaker Lexus would sponsor a film competition, but Writer-Director Kev Cahill was one of the 2016 Season 3 winners. Largely a visual effects supervisor (positioning actors in anticipation of the green screens), he was fully funded to create this short comedy that expresses the theme of Anticipation.

The true football story behind the film mirrors Iceland’s recent run at Euro 2016. The Republic of Ireland had qualified for their first World Cup, but in group play they failed to win a game. They advanced to the knockout round against Romania on 3 draws. On a Monday afternoon, work came to a standstill as Ireland and Romania went to a shootout for a quarter-final spot. The phrase “The nation holds its breath” is a famous sports quotation by the announcer as the final kick was taken.

Too much of this film is so nuanced. The importance of the game is understated. The comedy is quite subtle, except for a little bit about tossing dead pigeons at an unrelated wedding. The pace is languid. However, the actors are all a pleasure to watch. Sam Keeley and his expressive eyes remind me of a full-sized Peter Dinklage.

All the football is shown during the final credits, which include the PK shootout.

Lexus Short Films  is accepting submissions for its 4th Season through Aug-24-2017. Brostaigim! (Hurry up!)