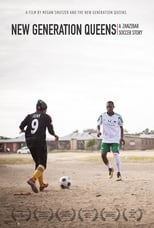 Megan went to Zanzibar and was looking for a pickup game. She found a women’s team called the New Generation Queens. They were getting chased off fields because Zanzibar is 99% Muslim, and women aren’t supposed to play football. But they prevail, and this pleasant little film, with an ethnographic story and a long title, generated even more questions after I viewed it.

Megan Shutzer and Katie Tygielski were housemates and fellow soccer enthusiasts at Harvard. They tackled this new adventure with a little funding from Kickstarter and Stanford, where Megan was attending graduate school. Their original project title was “Veils to Cleats”, and their goal was to capture the vitality and stories of these women who play despite cultural obstacles. As the team goes on to represent their region at the Sep-2013 Copa Coca Cola tournament, the filmmakers see them as role models for other women of Zanzibar.

Being of a certain age, I had only thought of Zanzibar as an exotic destination in a Bob Hope Road movie. It’s actually an archipelago of several islands, known as the Spice Islands, off the mainland of Tanzania, which is on the east side of the African continent.

Ruled by Sultans, Zanzibar was a hub for the Arab slave trade until Britain forced the Sultanate to end slavery in 1873. With an economy that originally relied on clove plantations, ivory, and slaves, conditions have been slow to improve. In 2015, the basic poverty rate remained at 30-55%, depending on the island. A woman’s role is predominantly to be a homemaker, which makes footballing even more out of the question.

As Shutzer and Tygielski progressed on the film, they ran into flak online for using “veil” in the project title, and for being perceived as “white women saviors”. They resolved to create a documentary that was collaborative with their subjects. In her blog, Tygielski eloquently addressed this:

“… I’m in a unique position–given my privilege, education, and access to resources–to provide a lens (literally) through which the voices of underrepresented communities can be shared. I am aware of, and still struggle with, the complexities of being a white person shooting a documentary about women of color in the developing world.”

“I was the poster child for white girls with savior complexes and misguided notions that the mainstream American way is the best/only way. It was only in immersing myself in life in India and Nepal (it took more than one trip, truthfully) that I realized that nobody needs saving, least of all from me, and that I could learn more from the people, culture, and religion in my adopted community than I could ever hope to teach. I am still learning.” – Katherine Tygielski

The next thing I wondered about was the Copa Coca Cola tournament. The film and the blog show that many things went wrong with the tournament, and I suppose that those details ruled out asking Coca Cola to sponsor this film at all. But what intrigued me more was the tournament itself, because I had never heard of it. I had however, seen the Mexican football film Atlético San Pancho, where Coca Cola balls rained from the sky onto a school team. Now I realize where those balls came from.

It turns out that Coca Cola has been sponsoring the tourney for decades, starting with Zimbabwe in 1989. Subsequently it was tied in with WC 1998 in Mexico and became known as the Copa Coca Cola. It is now run annually worldwide for young high school teams (originally U15, but now up to U17), and it holds events coincident with the world cups. It has become an opportunity for boys and girls to be showcased, and even if it doesn’t lead to a professional football career, it can lead to additional educational opportunities.

Lastly, I get to the question of sports activism and sport for social change. At one level, sport is becoming an accepted platform for celebrity athletes to speak out on human rights issues: racism, homophobia, sexism, and gender inequality, to name a few.

But at the lowest levels of the game, even UNICEF has identified sport, recreation, and play as ways to reach or educate children and their parents. Sport teaches all people teamwork, discipline, competitiveness, and self-assertion. It should also be good healthy fun. Megan Shutzer has written a very good article on how sport aids development, and how programs need to be internally driven by the people affected.

For women, playing sports can be empowering. Billie Jean King is the first role model for this (everyone should see the film Battle of the Sexes). But when you encourage women and young girls to participate, in a male-dominated society, are you fomenting a cultural revolution? In truth, perhaps you are. Perhaps there is a little taint of white savior at work. But the point is to give those females a choice.

Whether or not you get a chance to watch this film, I hope you take the time to ponder these thoughts. The filmmakers have done an exemplary job to explore the issues across documentary, blogs, and articles.

BTW, the soccer action in this film is mostly filmed around the practices, to give you an idea of the players’ challenges. Watching these women reminds me of the women I play with: soccer die-hards dedicated to the game.

In Swahili and some English with English sub-titles
Full title of the film is New Generation Queens: A Zanzibar Soccer Story
Soccer Movie Mom Rating = 7